Longtime readers know I have an obsession for eating local, especially when it comes to meat. So when I announced I was Austin, TX-bound for this year's SXSW Interactive Festival, my local pal Megan of local Austin blog, Olive's Herb Backyard insisted we hit Somnio's Cafe (1807 South First Street, between Annie and Mary) on my first night in town.
You see, I've been to Austin before. It's a great foodie town, but eating local, sustainable, and vegetarian... well let's just say, I trust Austin more with Tex Mex & BBQ. But, I'm willing to shift my issues with meat around a lot when I know where it comes from, so Somino's spoke to me. Here was a sampling of our meal. All of the meat is natural, hormone free, grass fed. The pastured chicken comes from Dewberry Hills Farm: 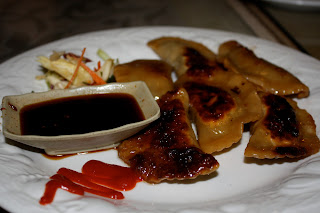 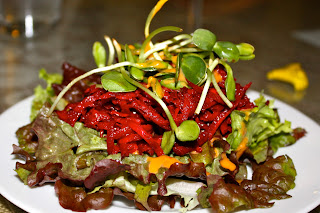 Uncle Bob's Salad with marinated grated beets mixed with ginger, carrots and served over a bed of greens with sprouts and honey soy vinaigrette (complimentary with entree or you can order their salads on their own)
Entrees and final word after the jump... 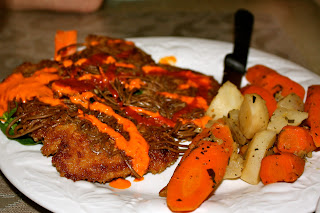 Megan ordered the Crazy Crispy Pork Medallions which were breaded with panko and crispy buckwheat noodles The side was local roasted carrots and turnips.
Truth be told, Megan had given up pasta and bread for Lent. Her husband Chris and I, who had not given up much of anything, decided to split the two things we both wanted most.... the Chicken & Dumplings: 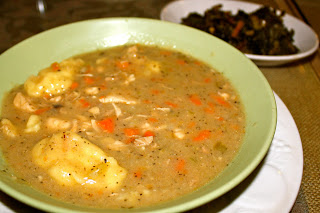 And the fresh pasta handmade locally by Pasta & Company with fresh marinara sauce: 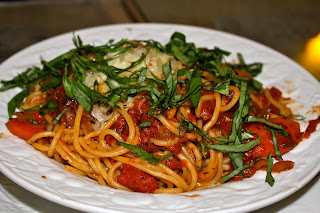 Another huge plus of Somnio's Cafe - it's BYOB, and with a corkage fee of only $2 per person, it's easy on the wallet. My only complaint, which isn't small, is the decor and lighting. I wanted to invite Ty Pennington to meet me for dinner, and bring a sledgehammer. A little low lighting and candles would go a long way in taking this good restaurant to the next level.
PS. They also had a bread pudding and a vegan brownie sundae which looked amazing... but we had things to do, people to meet, cocktails to quaff...
Posted by Tammy Gordon at 1:48:00 AM