Cleveland: B Spot by Michael Symon

I'll confess straight out. I'm a wuss. I happened upon B Spot for lunch in Cleveland. It's Food Network's Next Iron Chef star Michael Symon's burger/brat/bologna/beer/BLT joint - and he was there... and I just sat at the bar engrossed in my foodgasm until it was too late, and he left.

But, after I was served up the Lola Burger (burger with fried egg, red onions, bacon, cheddar & mayo)... 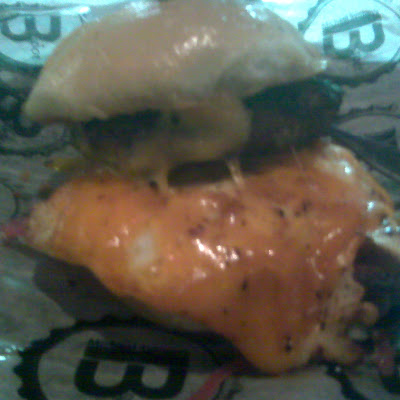 ... I plum forgot my the foodie celeb in my midst. Some of you know, I've stopped eating factory farmed meat, so I rarely get burgers. But Symon sourced his beef right there on the menu, which was like waving a red cape in front of this burger loving babe. Melt in your mouth is a trite thing to say about food, but it seems to have been invented for my first bite.

To add insult to injury, I passed up the fries and partnered Lola up with a chocolate marshmallow shake... 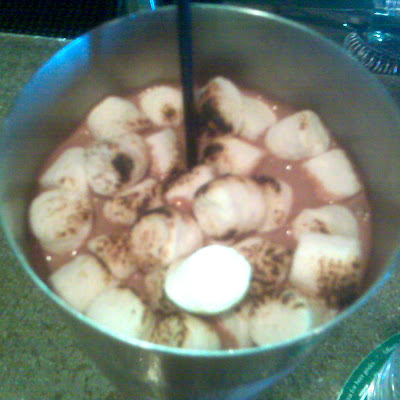 This bad boy came with a straw that could suck up the Hoover dam and a spoon, that was put to good use scraping every last marshmallow from the glass.

Now, eating alone can sometimes be lonely, but not at B Spot. The bartender was smiling, friendly and helpful in steering me to the right order. My neighbor to the right was a burly Trader Joe's employeer and to the right, my new friend, Jim Wallace. This 80 something gent and I struck up a great conversation about the delicious food at B Spot, social media, family, travel, and (sigh), the antics of Washington, DC.

I've just read about this place somewhere (probably SeriousEats). How cool you got to try it out.

Too bad you did not say hi to the chef: I think he's uber cute :)

Don't feel bad, I get super shy like that too! I would have definitely chickened out!

By the way, thanks for making me want a burger even though I'm not even hungry. I can't wait to check out B Spot now! Love you hun!

Your fellow Blondie via CLE,
Cara

I have several B Spot posts on my blog. But now, I have to try that banana-marshmallow shake.

Michael Symon is great; love his book (A History of Cooks and Cooking).

But he's the winner of Food Network's Next Iron Chef. I don't believe he's appeared on Top Chef.

I HAVE to try that place out :) Maybe I'll treat myself to dinner if I finish the entire section on Wills tonight... in case I encounter heaven early as a result of those burgers. Can'r wait to read about NOLA!