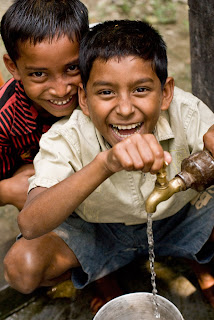 I often joke (or am mocked) about my Twitter addiction and my "Twitter friends", but I wanted to share one neat story about why it's been such a great platform for me - not just to get information in a different way, but to meet new people that I never would have come across.

Ali Holden's just down the street. She's one year younger than me. She likes all things DC (except tourists and drunk Georgetown students trashing her hood) and has a quick wit. I feel like I know her and yet we've never met.

At first it was just funny back-n-forth banter about life in DC or a guilty pleasure TV show that we both watch. As time went on I learned that she's raising a teenager - and if that weren't challenging enough, last April she was in a car accident that resulted in injuries that forced her to put her job on hold and in many ways relearn simple tasks. (read more here on her blog.)

So, what does Ali want for her 36th birthday?

To help build a well in a far away community that doesn't have clean, safe drinking water.

Charity water found me on Twitter and I find myself on the website daily, sharing the photos and telling everyone I know about it. It was founded by a guy named Scott Harrison who is about our age and who decided he wanted to make a difference. There are so many big and small ways that we can each do that in our own lives on a daily basis.

Today I made a small donation towards Ali's charity:water well. I hope you'll do the same and as we all band together to raise a couple grand, we'll be able to track our progress and eventually see our well on Google Earth here. Just $20 can give one person water for TWENTY YEARS! And you'll always be able to look up your well and see who and how it's helping. So neat!

Follow her @aliholden or read her blog at Holden It Together. Follow @charitywater for inspiration.
Posted by Tammy Gordon at 12:24:00 PM