What to Do With a Couple Hours in Amsterdam in the Rain...

So, I do this thing when I find myself in unknown territory. I boldly act like I totally know what I am doing even though it is very clear that I do not. This is how I found myself at the Amsterdam Central Train Station, launching off on a quest to find dinner and see canals wearing a falling-apart pair of Tom's ballet flats and no umbrella during a rain storm in a foreign country where I do not speak one word of the language (luckily they speak mine.) I did have a lightweight hot pink Patagonia rain jacket that I procured because I looked at weather.com before I came to Europe in Austin when I arrived unprepared for four days of rain during SXSW Interactive.
Instead of heading off in the general direction of a restaurant to assuage my growling stomach, I got distracted my adorable canals. I found myself winding down roads lined with shops of all kinds, yet somehow none carried wellies which was the thing I would need most over the next three days. So, me, in my sopping wet shoes, carrying a sopping wet map that I can't really read, but wearing an awesome rain jacket barrel through town, dodging almost getting hit by bicyclists left and right.
There's this other thing I do... I make the perfect the enemy of the good when it comes to food. And, I get hangry. So, I'm passing by these recommended places and they just don't have the vibe I'm looking for... not that I know what that is... but, I fired up Foursquare to see if I could get any local "popular" check in places. On the way to one of those, I found Cafe Wester and stopped in my sopping wet tracks at one word: albondigas. In addition, discuss this trifecta: Friendly, good-looking bartender + free wifi + a French bulldog named Lola wandering around...
I ordered up the albondigas. They were sold out, but the bartender recommended the Indian sweet & spicy version and they were fantastic.
With a warm, fully belly I set back towards what I thought was the direction of the train station. I think it might have been, but I was walking down one side street and thought, hey, there's a lady in the window... OH. MY. THERE. IS. A. IS. THIS? OMG. THERE. ARE. ACTUALLY. RED. LIGHTS.

I'm a wuss and I booked it out of there, asked some kind stranger to help me buy my train ticket back to the hotel since I couldn't read a word on the ticket machine and slept like a rock.

[More after the jump]
PS. For those of you who don't believe that I was actually working, meet my new friends who I had a great discussion about social media and the 50+ population in the Netherlands...

PSS. I'd always heard people bike a lot in the Netherlands but it was wild! This was the parking lot at the train station... not for cars... for bikes: 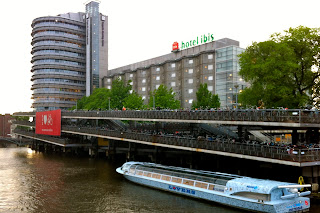 PSSS. I can't wait to return, bring appropriate footwear and Ike, ensconce myself in a houseboat, and yes, see the Anne Frank house which I couldn't handle in just a couple hours.
Posted by Tammy Gordon at 7:45:00 AM

Hmm, based on your location @ Cafe Wester, you probably wandered into the Singel RLD -actually much smaller than the big RLD (Walletjes)
If u go back, LMK - my fav cit in the world and actually
Had an apartment on Rembrandtplein for 2-yrs?
Will happily give you a custom tour map for AMS, based upon what you want to see.
(written as I sit here in my NED jersey watching Portugal knock us out of the Euro cup... Boo)
@Duffeb

I tweeted you, but wanted to say thank you! A custom map next time would be amazing. DM me on Twitter and I'll send you my email.

I'm kind of glad I was in the smaller RLD - it was like, entry level. I'm supremely jealous of your apartment there... I'd love to come back for a few weeks and relax into the city.