I "fave" a lot of links that I want to come back and read. Some times I do, some times I don't. But every week, there are a few pieces that make me think and want to share them. Here are the ones that caught my eye this week...

The Longevity Economy Meets Social Media
If I have to do one more misinformed "older people don't get social" or "teen flight on Facebook" interview, I might lose my mind. Sascha Segan of PC Mag nails it when he takes on the notion that it even matters whether or not teens stay with Facebook. Their older audience is surging. And that's the audience with more connections - and substantially more dollars to spend.


"To best use Facebook, you have to know a lot of people already, and not want to leave them behind. In other words, you're more likely to be a grownup."


The Future of Television
As someone who's daily trying to figure out what to build for TV, YouTube, Roku, Instagram video and Vine, I loved Jerry Seinfeld's take at BuzzFeed Brews as he launches his "Conversations with Comedians in Cars" YouTube series on the Crackle network (which I watch on Roku... so many layers.)


“Why would I put a show on a big heavy rectangle in your house when I could put it in your pocket?”

It's so much fun to see how he's breaking the model. Where does the show live, how many different formats... doesn't matter unless the content is entertaining, moving or informative. Luckily for him, his is. Watch it here:

The Fastest Town in America
If you asked me who had the fastest internet in the United States, I would have guessed Silicon Valley. Nope. It's Chattanooga. Interesting gamble by a cool, smallish city to make it's place in the Innovation Economy. Makes me want to visit.

The Washington, DC Food Scene
A recent topic of conversation at a dinner party was, how many of Washingtonian's Top 100 Restaurants have you eaten at? I hadn't looked at the list yet. My number is currently at 53 and rising. How many have you tried? What's the list missing? Who's over rated? I could talk about that for days.
What's Happening Under Ground
I'm a little obsessed with the abandoned and locked up space underneath Dupont Circle. I wonder how many cities have interesting underground space like that? I know Seattle and Atlanta do. Here's how one mayoral candidate in Paris is envisioning redesigning abandoned subway stations.
Things As Scary As Heroin Shouldn't Come Back In Style
Like most movie fans, I was sad (and mad) to hear about actor Phillip Seymour Hoffman's overdose death. This New York Times article opened my eyes to the enormous increase of heroin use - a 67% rise in New York City and 20% overall across the United States. When I think heroin, I think Trainspotting.  But it's increasingly people moving from a pain pill addiction to heroin (which is apparently cheaper and more easy to access in some places. How is that possible?)

I'll Have What She's Having
I know I work there and all, but how gorgeous is Susan Sarandon on the cover of AARP The Magazine this issue? You can download the magazine on iTunes and Android to read her interview (and also, yes, look at the gorgeous design job my colleagues are doing! They also have a killer design team Tumblr.) 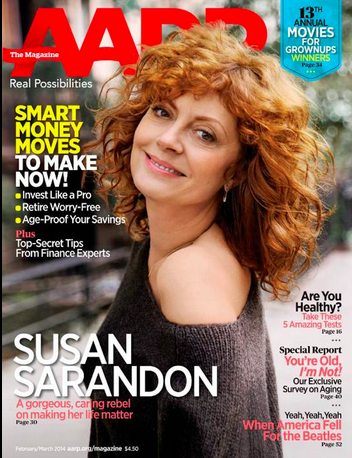 New Blood at Microsoft
I'll admit, I'm an Apple devotee these days... but that's not to say that my business isn't up for grabs if they get out-innovated and out-designed. As Microsoft looks to the future, it's smart to get to know the incoming CEO Satya Nadella. Is he the hoodie-wearing cat who will shake up the model or is he the guys who's been there for 22 years? Can he be both? I don't know, but I liked this quote from his announcement to his employees:


While we have seen great success, we are hungry to do more. Our industry does not respect tradition — it only respects innovation.

All organizations that have been around for a long time would do well to share in that ethos.

Ladies, Stop Saying You're Sorry
We rolled out Lean In at our office a few weeks ago and it's started a lot of good conversations. My favorite thing is that it's got women and men talking about gender in ways that we hadn't previously. The most productive video I watched this week on the Lean In site was Bill Hoogterp's "Own the Room" talk. Watch it and you'll start cringing every time you start to say "I'm sorry" for something that you really shouldn't say "I'm sorry" for. Talk to your friends about it. Is this something you do? How can you train yourself to stop. I'm now following Bill on Twitter where he gives great tips on presenting - and how to present yourself in the workplace. It's a good follow up to Amy Cuddy's "Power Posing" TED Talk (which you should also have watched by now. So. True.)

Does Your Brand Have a Snapchat Strategy?
Look, unless you're targeting teens, you probably don't need one. But I love it when brands try something new, even if it's just to learn how to better provide live coverage of real-time events. That's the thought behind the (not always socially savvy) Washington Post Snapchatting the Superbowl. I learned about LaterPic, which allows for pre-production of Snapchats, that WaPo is on Snapchat at "postpolitics" and that three people Snapped back... which is kind of fun to consider on the social engagement front.

Olympics or No Olympics... How Bad Is Russia?
I've never been to Russia, so Sochi is a lens that is freaking me out about visiting. Merici, who lived there, breaks down how it's both awesome and scary at the same time in her first Medium post.