When two of my favorite gals from New York popped into town unexpectedly on business and wanted to meet for a drink near my office, I suggested Chef Jose Andres' new joint America Eats Tavern. It's actually a renovation of his Cafe Atlantico restaurant on 8th Street NW near D. You'll see familiar architecture and staff, but it's a totally new scene - an homage to Chef's adopted nation in both decor and delicious food. 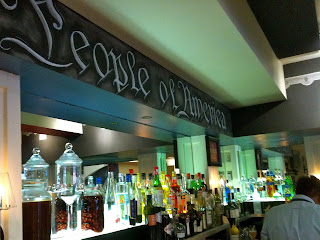 Behind the bar at America Eats Tavern (photo: Tammy Gordon)

The concept is actually a partnership with the National Archives exhibit, What's Cooking. Uncle Sam? and each option includes a history of the dish and why it's important to America's culinary journey.

There ended up being four of us, so we sampled a good cross section of the small plates offered. My favorites were the refreshing Southside cocktail (visit Trevor at the enlarged, more comfortable bar), the moist hush puppies with luscious corn butter, the fried oysters with egg & bacon (ask for the story behind it!) and the refreshing grapefruit and shrimp salad. Pics of those and more:

I'm going back next week for the full dinner experience, but after just three days of being open, America Eats Tavern is one to add to your to do list!

Make a reservation while it's still in town - the concept will only last for seven to nine months. And to stay up on what's next, follow Chef Jose Andres on Facebook and Twitter.

PS. If you're missing Minibar, it should be back in action next weekend. Right now, it's serving as America Eats Tavern's raw bar.
Posted by Tammy Gordon at 9:40:00 PM

I'm so freaking jealous right now! i'm not going to say anything nice because I'm too damn jealous!

Can't wait to go!! (though I guess I will have to wait, not going for another 10 days)

When you go back again, can you snap a pic of the menu and post it? It's not online anywhere.

What's in the Southside Cocktail?

Hmm... I wonder how many visits it will take to get through the entire menu--because I think that's how many reservations I'll have to make!

The Southside was very refreshing - gin based with lime and mint

Can't wait to try this restaurant out! And, I love how Chef Andres blended the concept with the National Archives to make it distinctively DC!