What I've Been Eating: Trotters Tots at Dino

When you put "tater tot aficianado" in your Twitter bio, a bat signal goes off whenever a new tot arrives in town. This morning Jeff tweeted me that Dino had 'pork tater tots' on the menu tonight.

Well, it was my duty as a blogger to investigate, right? 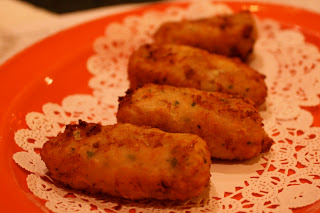 As part of Dino's Three Little Pigs Dinner, Trotters Tots were one of ten courses using three pigs at this special one night only dinner. I begged bartender Andrew Shapiro to sneak me an order so that I could taste. They were soft and pillowy inside with a crispy outside. The pork taste wasn't overpowering, though Caroline did say they tasted like breakfast.

Owner Dean Gold swung by and clued us in. The tots were made from pig's feet. (This explanation's not for the squeamish). Once the bone was discarded, they separated the meat part from the rest. The pork meat was whipped into the potato part of the tot. Then it was rolled in the crunchy "rest", lightly dusted with flour and fried. Oh my.

PS. I love what Andrew's done with the cocktail menu. Cranberry and gin. Apple whiskey. *swoon*
Posted by Tammy Gordon at 11:08:00 PM