With the blizzard of 2010 entering night two, we were in full hunker down mode. Which means we'd been laying around, watching movies, and eating... A LOT. But I couldn't let gluttony bring me down... I had ingredients in the fridge... and I was bored... really bored. Next up on my blizzard blogathon was Vidalia's Mac-n-Cheese. Vidalia's a fantastic restaurant here in Washington, DC that serves high end Southern food for expense account budgets - or barfly splurgers like me.

For those of you who know me, you're probably thinking, really, you're going to attempt *Vidalia's* mac-n-cheese... maybe you should try Kraft's? But blizzards beget boredom and baking ambition. True to form though, there were going to be a few tweaks to the recipe. 1) I have no blender 2) I have no cheesecloth and 3) Whole Foods P Street had never heard of goat cheese curds. But it's noodles and cheese... how bad could I mess it up!

For this recipe, one of the most important things is to get all of your ingredients measured out for the sauce before you start making it because it needs constant stirring for 20 minutes. So measure it out and lay it out next to your stove top: 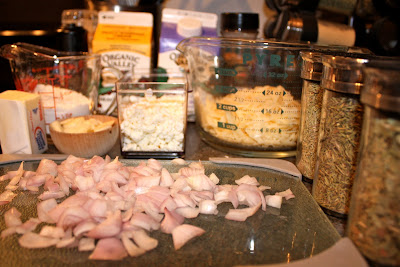 I started veering from the recipe by making the elbow pasta first and putting it aside. One less step to deal with while you're trying to get the most important part - the mornay sauce - done.

To start the mornay sauce, you melt 4 oz of butter in a sauce pan and add 2 tablespoons of sliced garlic and 1 cup of diced sweet onions (I used shallots because I had them on hand) until they become translucent. Then sift in 1/2 cup of unbleached flour, while constantly stirring to ensure that nothing sticks or burns. That's the toughest part. If you made it this far, you're in the clear. Next up add 1 pint of half and half and 1 quart of heavy cream to the sauce pan and stir. At this point, not having cheesecloth to make a sachet, I just added a pinch of bay leaves, rosemary and thyme to the sauce and continued stirring for a total of 20 minutes.

Remove the sauce from the heat for 10 minutes. While the sauce is cooling down, add 1 and a half cups of grated white cheddar (you can also use goat cheddar, but I couldn't find it at the grocery store) and 1 cup goat cheese (or goat cheese curd, again which I couldn't find) and stir into the sauce. [Take a moment here to pre-heat your oven to 375 degrees.] 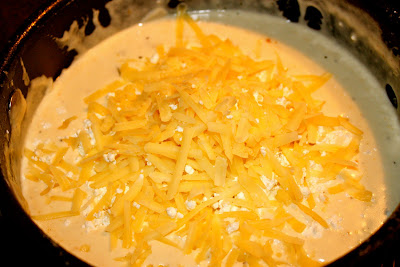 Season with salt, pepper. The Vidalia recipe called for additional seasonings of mustard powder, nutmeg, and cayenne pepper, but I didn't have those so I used a spicy cajun seasoning that I had on hand and it was fine. I didn't blend or sieve like the recipe called for either, just whisked and kept stirring until it was all combined. 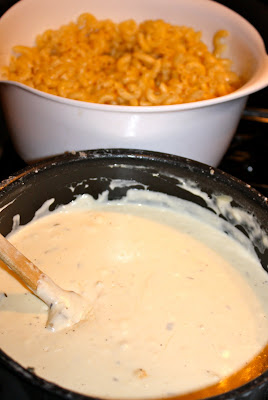 Combine the cooked elbow pasta in a large mixing bowl with the cheese sauce and any additional ingredients - I used prosciutto, but you could also use lobster, crab, truffles, ham or bacon. 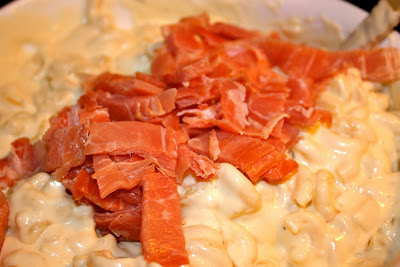 Thouroughly combine and pour into a large baking dish. Top with crushed 1 cup of crushed Ritz crackers and bake for 30 minutes. Make yourself a glass of wine to celebrate... the next step is enjoying the deliciousness! 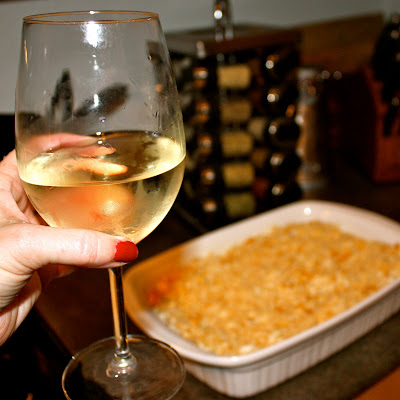 Remove and serve. Sit back and let your family, friends or even your internal monologue tell you what an amazing cook you are! 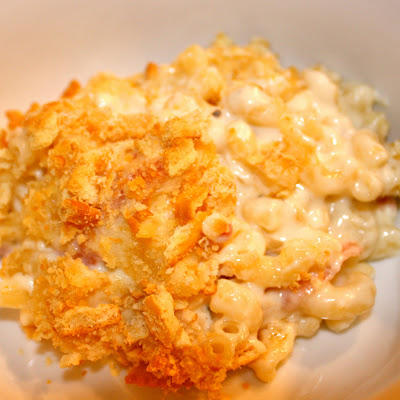 Awesome. Since I am in Tampa, I would enjoy seeing a little of your blizzard and eating a bit of that mac and cheese. Ritz crackers on top sounds good.

Seriously, the snow sounds pretty, but be careful and keep warm. Don't mean to make light of the situation up there.

So fun to find your blog! I thought you were just a Twitter genious! I'm @Baltiville ;)
The dry mustard makes it creamy...but yours looks plenty creamy. Dry mustard is also a great trick to add to cheese grits. Enjoy the snow and you know you'll burn all these calories shovelling 30 inches of the stuff. Cheers!