When you talk nationally-known, celebrity chefs in Cleveland, Ohio, Michael Symon is the man. But Jonathon Sawyer, Symon's former Lola chef is an up and comer that I've been hearing a lot of buzz about - even as far away as Washington, DC.

I had a few hours downtime around lunch today in downtown Cleveland. I set off on foot planning to visit Symon's Lola (I previously raved about his burger/brats/beer mecca, B Spot.) But, just a few doors over was Sawyer's Greenhouse Tavern. I approached and checked out both menus in the window and apprised the lunchtime vibe.

I picked Greenhouse Tavern, partly to try something new, partly to get a head start on tasting a talented new chef, partly because the menu had a good selection of vegetarian, vegan, fish and meat, partly because it was locally sourced... but mainly, I fell in love with the front dining nook where being a single gal at lunchtime, sporting a camera to take food pics seemed perfectly suited. 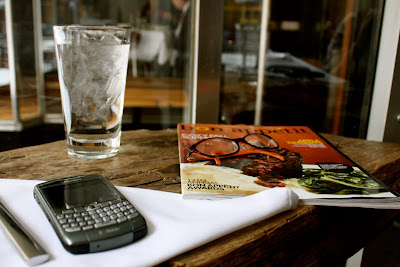 I decided to be adventurous and to explore the vegetarian side of the menu. My first course was the simple French Breakfast Radishes with butter and salt. I was shocked at how much I enjoyed the crunch of the radishes combined with the pat of salty butter on top. I paired it with a glass of Sparkling Rose. 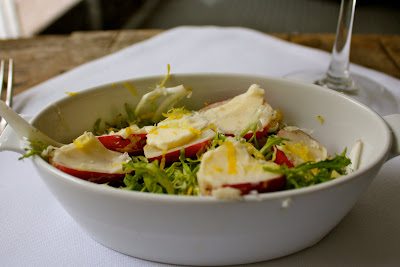 Next up, I had the Vegetarian Entree which was a Farro (a grain kind of like quinoa) cooked risotto style with white wine, parmesan cheese and artichoke hearts. It was hearty, winter heaven topped with a small bed of shaved celery salad and Italian parsley. I may or may not have licked the bowl and talked the hostess into spilling a few recipe secrets so that I can attempt this at home: 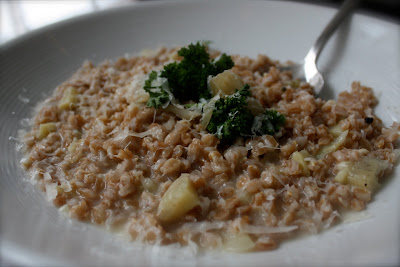 At this point, I knew a blog post was going to happen. It was simply one of the best meals I've had in weeks, maybe months. It's definitely the best vegetarian meal I've had. [NOTE: If he does make it onto Top Chef, when you see Natalie Portman or Zooey Deschanel walk in the room, it's time to fear Sawyer.]

Sooooo... I *had* to try dessert, right? The hostess led me to her favorite, the Caramel & Chocolate Pot de Creme, which definitely didn't disappoint. The crunch sea salt on top kept it from being overpowered by sweetness... and my perfectly prepared cappuccino sealed the deal: 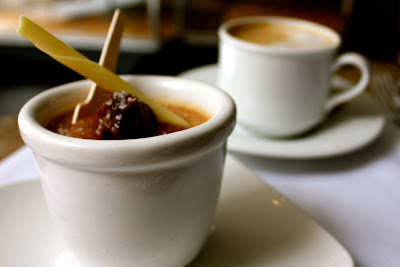 I still want to try Symon's Lola (maybe for dinner...) but folks, when in Cleveland, you gotta also taste you some Sawyer.

PS. Seriously, one day, I will have a bathroom throne with a view like this: 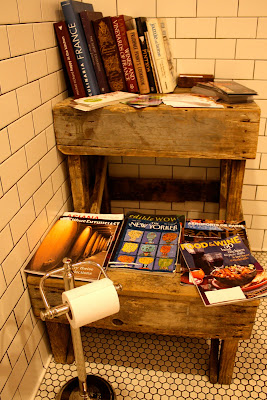