Bruschetta in the Blizzard

Dateline: Alexandria, VA Scene: Apartment, two fiercely independent people who usually like each other a lot trapped for the 5th day in 800 square feet. Time: Dinner

He wants: Totino's Pizza from the Shell station.

She wants: Something less packaged and involving vegetables. 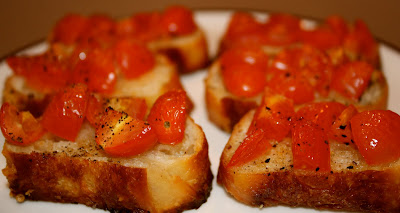 Preheat oven to 400 degrees. Drizzle olive oil in bottom of the pan. Lay slices of bread flat on the oil. Layer the diced tomatoes on top of the bread. (If you have them on hand, you could add extra diced veggies or spices... we're in a blizzard and the grocery stores are ransacked, so we kept it simple.) Drizzle with olive oil and grind sea salt and pepper over the top. Bake for approximately 8 minutes, until slightly crispy.
Posted by Tammy Gordon at 10:13:00 PM

This looks awesome. And I'm glad you guys can still compromise after being stuck together for 5 days :) I don't think I'd have this ability.

If this keeps up, you can write a Blizzard Cookbook. The bruschetta looks good. Having eaten both, I'm sure it was better than the Totino's. Hang in there. Can't believe the pictures of the snow coming down.

No basil? No Parmesan? And you put the tomatoes on BEFORE you put it in the oven?

Down here in Florida, we call that the "r" word.

Jetpacks: It was a blizzard, we went with what we had! And it was DELISH! The tomatoes got all warm and yummy, but retained their tang.