When stocking up for Washington, DC's anticipated 2-3 feet of snow, there was a near yuppie riot at the local Whole Foods. I'm talking lines outside... one in and one out... but racks of ribs were on sale and I had grand ideas about fun food to make, so in I went. In anticipation, I had tweeted looking for recipes and stumbled upon SavoryReviews.com's "BBQ Sans BBQing" concept. By immersing the ribs in liquid smoke, spices and beer at a low heat, the blogger promised that I could achieve BBQ right in my oven.

I was shocked at how well it worked! The meat was falling off the bone and the sauce had carmelized on the outside of the ribs. We accompanied it with Parmesan Potatoes (recipe below) made in our grill pan placed in the oven as well. 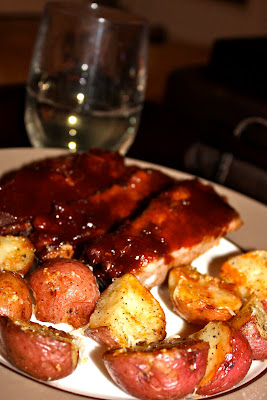 1. Set pot to boil. Wash potatoes and puncture each with fork. Place potatoes in boiling water until cooked almost all of the way through (about 5-6 minutes). Remove from water, drain and set aside to cool.
2. Drizzle olive oil on grill pan. Cut potatoes in half and place face down on grill pan. Sprinkle with ground salt and pepper.
3. Bake in oven at 350 degrees for 5 minutes. Remove from oven and flip the potatoes face up. Sprinkle tops with shredded parmesan cheese. Place back in oven until cheese has melted on top.
4. Serve.
Posted by Tammy Gordon at 11:01:00 PM

These recipes alone make it worth reading your blog. I'm definately going to try this. Maybe for Superbowl on Sunday.

The ribs were more adventurous, but the potatoes were my fave! Slightly crispy, sllight salty, slightly cheesy... nom!

The ribs look awesome!! Glad you enjoyed them. BTW, totally going to try the potatoes.