Tales of the BBQ Virgin...

So, Twitter collectively was aghast when we realized our pal @MissMolly_DC had never had BBQ in her life... ever. @JeffDonald, @BlairDC and I sprang into action and invited our online pal offline to Old Glory in Georgetown to rectify the situation.

Now, *where* you get the Q is a hot debate, no matter where you are in the US of A. In my hometown (Tampa, FL), I like either First Choice BBQ or Smoke BBQ & Grill. @BlairDC's partial to Smithfield's for Eastern North Carolina Q (btw, LOVE that Smithfield's tweets, Facebooks AND ships their BBQ!) and Joe's BBQ in Whiteville, NC. @JeffDonald gives his hometown shout out to Speedy's BBQ in Lexington.

Now, I know DC *thinks* it's the South sometimes, but those of us from Virginia and below disagree. Still, it does have passable BBQ, namely Capital Q in Chinatown, Rockland's in Glover Park, & Kenny's Smokehouse on Capitol Hill. We chose Old Glory because they have a variety of sauces from across the country: Texas, Savannah, Carolina, Kansas City & Memphis. If we were going to make @MissMolly_DC love Q, one of the first decisions was gonna be what kind of sauce do you like. [Also, we'd be lying if we didn't say that their bourbon selection/challenge wasn't a factor.]

Our crew grew to include @SarahStanley, @DCMaryMargaret & @xristoargyris and @JeffDonald had to drop out (prolly to head to NC for BBQ). We ordered up Old Glory's Frickles & Bottle Caps (fried pickles and jalapenos with a Memphis BBQ dipping sauce) because @AndyMacMiller tweeted us that we had to (also I've never turned down a fried pickle chip in my life.)

My standard order is pulled smoked pork with two sides. I'd get 6 sides if I could fit them in my gut, for I think sides are one of the best things about going for Q in the first place. This time, I settled on the fried okra & cole slaw. 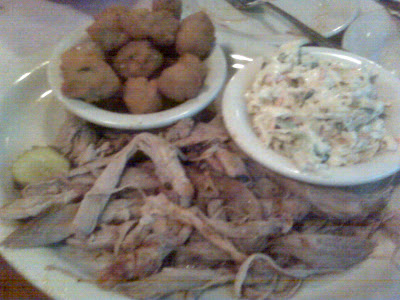 @MissMolly_DC ordered up the Pulled Pork Sandwich with Fried Okra & Collard Greens. Fairly bold, I thought for a gal from Binghamton, NY who's never had BBQ. 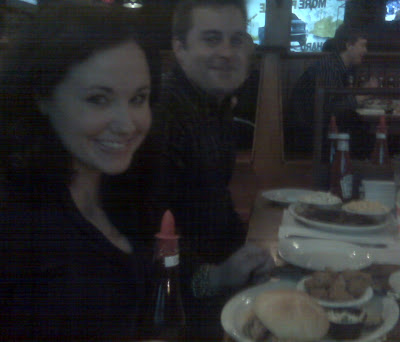 We also grilled @MissMolly_DC about her hometown's foodie claim to fame, which are "spiedies" (also on Facebook)... anyone up for a road trip to Spiediefest 2010??

Operation BBQ Virgin was thus complete. Half of the fun of getting together for BBQ is that it's super laid back, everyone's got their favorites and even meh BBQ is still delish.

[PS. For those of you following my veggie adventures, this was my meat cheat of the week! I almost always save it for BBQ or bacon!]
Posted by Tammy Gordon at 10:31:00 AM

Any BBQ place that has to specify "pulled" is no real BBQ joint.

We are going to ship Yankee Doodle some authentic Eastern NC Bar-B-Q and stop this madness!

So, we have to know... what was the final verdict for the BBQ Virgin? I can only guess that she is now as hooked as the rest of us :-)

She's hooked! She just texted me that the Smithfield's team sent her Q from NC and now she's convinced that's the best thing she's ever tasted!

I don't know about this spiedie thing, but I'm game to try hers out!