Sunday morning, I was a woman without a plan. Still in New Orleans, I was bound for the French Quarter, stomach growling and in need of coffee. I turned to Twitter and the recommendations started rolling in. Because I was pretty casual and by myself, I picked Stanley in Jackson Square at the recommendation of @NOLATalk. I'll admit as an avowed Twitter addict, my interest was piqued by their chef Scott Boswell, aka @ChefScottB, being on Twitter. 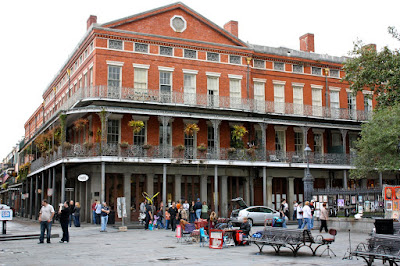 Despite the playoff malay that was descending on the city, I found a seat at the bar and was greeted immediately by a guy behind the counter who set me up with coffee and a menu. When he returned for my order, I told him I was up in the air over the Bourbon Street French Toast and the Eggs Stella. When I told him I really wanted the french toast but couldn't stop thinking about the cornmeal crusted soft shell crab that came in the Eggs Stella, he immediately said, "Well, why I don't I bring you the french toast with a soft shell on the side."... Um, yeah, that would be freaking the best thing EVER. 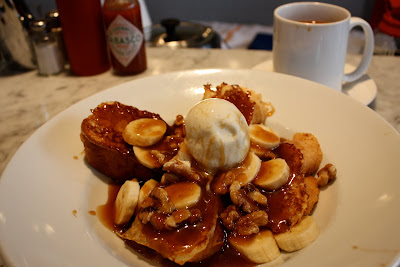 And here's the side serving of cornmeal crusted soft shell with (my favorite) Crystal Hot Sauce: 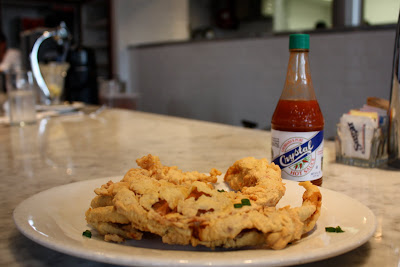 This was one of the best restaurants I've eaten at in New Orleans. Ever. Add it to your list for your next visit!
Posted by Tammy Gordon at 7:30:00 PM