Fudge Challenge: To Fluff or Not to Fluff... That is the Question...

On New Year's Day as we sat watching bowl games, the BF casually says, "You know, since you're learning all of this cooking, you should learn to make fudge." "Fudge?" I say. "Well, it was my favorite thing that my grandmother made," he replied. And, thus was born a new challenge. (He also wants me to learn to do fried chicken, but that's another post as anyone who knows my aversion to touching raw chicken will tell you.)

I wasn't sure where to start. Did I need a candy thermometer? (Yes.) Would a straight off the box recipe be what he sought, or would some fancy big name chef do the job? Per usual, I Googled, tweeted and came up with a menagerie of contenders.

There seem to be two camps: Those who use Marshmallow Fluff and those who do not.

For my first attempt, I used @nikki_d's fabulously simple fudge recipe and it was great. He loved it... so much so that I had to swipe half of the results and take them into the office so that he didn't eat it til he puked. Nikki's recipe is so simple you could tweet it, and I think I did. You melt 16 oz of semi sweet chocolate chips in a double boiler (If you are me, this is two sauce pans precariously held.) Remove from heat and add 1 teaspoon of vanilla and a dash of salt. Whip in one can of sweetened condensed milk. Pour into pan and chill for two hours. slice and eat!

One tip that seems to be ubiquitous is that if you line the pan with foil, it's much easier to remove.

While that was good and satisfied his craving, he called in his Grandma's recipe from his mom and it just so happened to be in the Fluff camp. It also came to be that Grandma's super secret fudge recipe is also on the back of the Jet-Puffed Marshmalllow Fluff jar... but hey, who's judging... most of our family recipes probably are too! True to form, I tweaked a bit, but here it goes:

Melt one and a half sticks of butter in a large sauce pan with 3 cups of sugar and 5 oz evaporated milk (about a half cup). Stir constantly and bring to a rolling boil on medium heat. Boil for about four minutes or until candy thermometer reads 234 degrees F (I wonder at this point 1) how I actually own a candy thermometer and 2) who decided 234 degrees... kind of a random number) - while continuing to stir constantly so that it doesn't burn. Remove from heat. 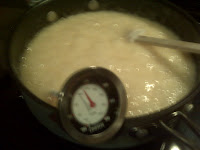 Add in one bag of semi-sweet chocolate chips (the actual recipe calls for 12 squares of Baker's Semi-Sweet Chocolate but I used Ghirardelli chips) and one and a half cups of Jet-Puffed Marshmallow Fluff. I'm sure it works with other brands of Fluff, but who am I to muck around with Grandma's secret recipe. 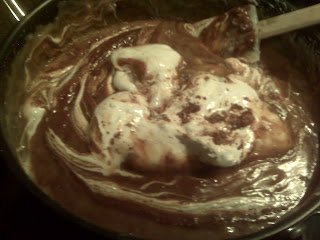 At this point, you add in one teaspoon of vanilla and any fixins (nuts, etc)... we're fudge purists so ours are straight chocolate. One FloridaGirl signature I added was to grind sea salt over the top. I love a salty-sweet combo.

Pour immediately into a prepared pan lined with foil (9x9) and let stand at room temperature for four hours or until completely cooled. Hint: If you set on your balcony in 29 degrees it sets pretty quickly. Cut into 1 inch squares... or if you are my BF, while I'm asleep, cut into 3 inch square and eat half. Store what's left at room temperature. 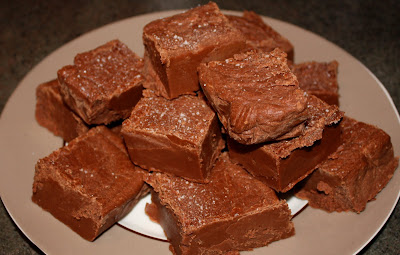 My mom's fudge was the Hershey's cocoa variety. It smelled awesome while it cooked. It makes a kind of hard fudge. She always filled it with pecans which kind of took the edge off the super sweetness. I actually made some this Christmas. Just another option.

Fluff is where it's at. Swear by it!

Dude. The best thing about the fudge, besides the insanely delicious fudginess is the coarsely ground sea salt on top. It takes it too an entire 'nother level!

Shari - there's always room for more fudge. I may need to do that one next!

Your kitchen adventures are the best! I've never been much of a fudge girl, even though I was born in Michigan and spent my honeymoon on Mackinac Island at The Grand Hotel. However, I just made my first batch of fried chicken ever. Both parents were born in Memphis so I'm a Northern Belle living in Baltimore via 15 years in DC. The point, I didn't have to touch raw chicken! Use tongs and/or rubber gloves. You MUST run, not walk, to get The Lee Bros. Southern Cookbook if you don't already have it. Try the Sunday Fried Chicken on page 335. I added, you guessed it, dry mustard to the flour, as well as lemon pepper, cayenne, paprika and French fluer du cel (fancy). Hope you'll try it. :)

Love the addition of sea salt on the top - genius!

Growing up in San Diego, I had never fried anything. About 6 months in to dating my Texan BF, I started learning to fry chicken for him, too. I still haven't nailed it! ;)

Love the sea salt touch. I make a salted choc carmel tart and I swear the sea salt is what MAKES it! I like the 1st recipe you posted with the double boiler, it looks easy and good. Probably wait till next Dec to try it though:-)