So, here in DC, one of our top food blogs called Metrocurean does this thing where she interviews people for their top 5 bites in town.

Atfer my week in Seattle, here are my top 5 bites:

Tom Douglas' Triple Coconut Cream Pie
This pie was so good, I had it TWICE. It's on the menu at Douglas hot spots Dahlia Lounge and Palace Kitchen. The toasted coconut isn't overpowering and it's softly piled on a pile of white chocolate cream nestled to a pretty pile of tangy pomegrante seeds. I'm now a Douglas devotee and can't wait to try his other restaurants, especially the one that got away... Serious Pie. [Note: I also picked up Douglas' I Love Crab Cakes book with 50 recipes from across the country at Elliott Bay Books in the used section for just $6! #recessionita #win] 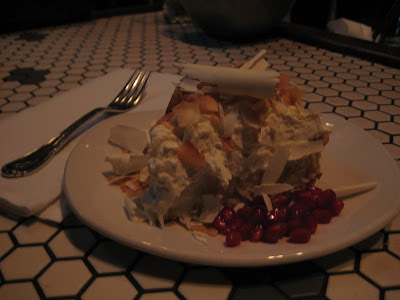 Breakfast at 5 Spot
I had the Cinnamon Swirl French Toast which was dipped in a vanilla batter and griddled... served with Nat's caramel instead of syrup. Worth getting up for. [Runner up to the food was the friendly neighborhood service and clientele. One local was telling the bartender that he was in the Marines for 35 years and didn't get off on Thanksgiving, why should she?] 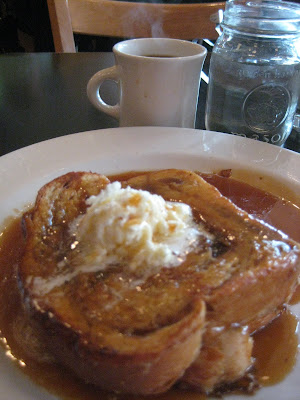 Buffalo Mozzarella with Pear and Arugula at How To Cook A Wolf
Please don't make me choose just one thing at How To Cook a Wolf! As you saw in my previous post, I might be equally smitten with the chef, the service and the food. If I had to pick one thing to eat again today, I'd pick the buffalo mozzarella. To call it a salad is a disservice, though it came piled with earthy arugula tossed in a tangy balsamic. The cheese was soft and more delicate than any mozzarella I've ever had. And the sliced pear on the side was an unexpected sweet punctuation mark. 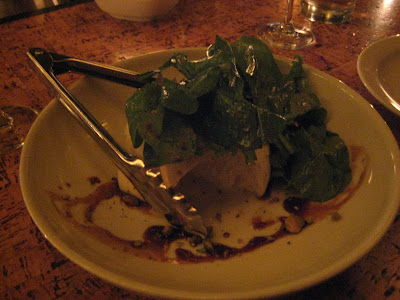 Cuban at Paseo's
I'll start by saying I know my Florida friends will find this heresy. I was raised on Cuban sandwiches in Tampa, FL. But the Cuban sandwich at Paseo's in the Fremont neighborhood of Seattle is more inspired by authetic Cubans than a carbon copy. In it's own right, it is a masterpiece of a sandwich. The marinated pork shoulder is juicy and has just the right amount of kick. It's layered on a toasted French baguette (no, not authentic flaky Cuban bread, but delicious nonetheless) with aioli, cilantro, crisp Romaine lettuce and pickled jalapeno peppers. Floridians and native Cubans alike, you may quibble with the moniker, but there's no doubt why this concoction is Paseo's top seller. [Note: I shouldn't leave out the side of corn on the cob that accompanies the sandwich. I swear to you, it's served up rubbed down in the juices of the pork drippings...]

Squash & Mushroom at Harvest Vine
I'm so mad I didn't get a photo of this simple dish that showcased these two fall vegetables. It was sweet and nutty. Served artfully in a layered cylinder of farmers market bounty, with a quail egg on the side. Instead of a great photo of the dish, I'll give you a Flickr of the chef. The entire menu was seasonal and creative. The chef and his team making your dinner right in front of you was all part of the evening's entertainment. The space is really intimate, which so long as you aren't waiting outside, is fantastic.