I'll admit, I've been a market challenge failure recently. Buying that okra, staring at it for weeks and tossing it, all because I was scared to fry in bacon... or more directly scared to clean up the mess of frying in bacon. But the butternut squash challenge was ON. And it wasn't going bad anytime soon. It started like this here. Calling to me from the Arlington, VA Farmers Market last weekend. 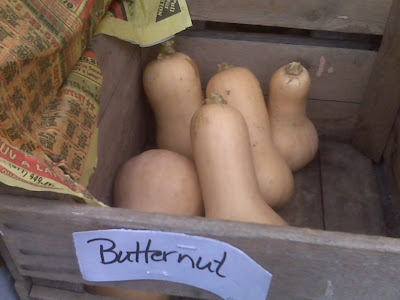 I like to live tweet my farmers market visits because by the time I get home, my Twitter pals have already sent me recipes and ideas... as well as moral support for the challenge ahead. After sifting through how tos, soups and baked recipes, I settled on attempting Giada DeLaurentis' Butternut Squash and Vanilla Risotto recipe, but I made a few tweaks when Giant and Trader Joe's didn't have whole vanilla bean.

I'll admit, I was intimidated. I didn't even know how hard it would be to cut that bad boy open. Much less, how difficult it would be to attempt a Giada on my first try with this [vegetable? fruit?]...

I got the biggest chef's knife nearby and stood it up on the cutting board. I pulled the knife down slicing it in half. It wasn't easy.... kind of like cutting a pumpkin. Smelled similar and had similar seeds too, which I scooped out and threw in the trash. 30 seconds later, I re-read the recipe and realized the seeds and pulp were all supposed to be cooked together... so that's where Giada and I started parting ways. 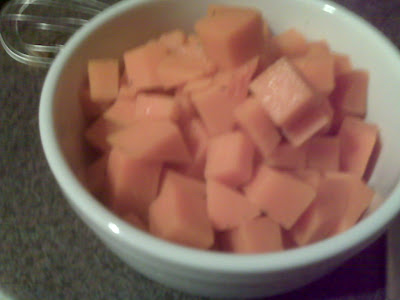 In simmering vegetable broth, I cooked the cubed butternut squash for about 5 minutes. I scooped it out and put in the bowl to the side. Giada had ordered me to keep the broth to use with the risotto... and I actually read that line immediately before I was about to pour it out through a colander. Win!

In another sauce pan, I cooked the onions in butter until they were translucent. Then I poured in the arborio rice and stirred until they were all mixed together. Then the best part... add vino. To the risotto and my glass... cheers! 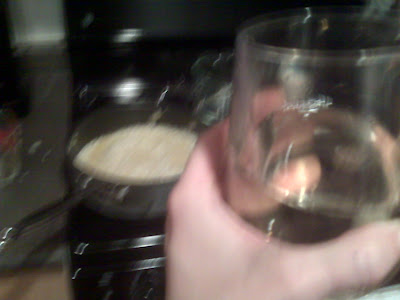 I sipped my vino as the risotto cooked down and every two minutes, I added a cup of the squash broth and stirred. Once all of the broth was incorporated, I added the squash, a little more butter and the parmesan cheese and stirred it all up. At this point, my stomach was growling and the house smelled like heaven. Here was the finished product before I inhaled two bowls of it. Even the man pronounced it "good"... 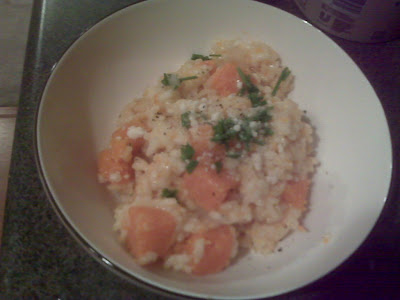